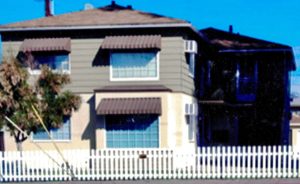 When we purchased our building in January 2008 it was a quaint 4-unit apartment building that was built in 1951 (see photograph).

When Gig was in law school in Berkeley in the 1980s he used to drive by two classic homes that were converted to law offices, one a Victorian and the other a craftsman. As it turned out, the craftsman home was owned by one of his law professors, John Hetland. When Gig saw the fireplace in the living room/lobby of Professor Hetland’s office, he was hooked with idea of a residential office.

Years later when Gig left his law practice to become a fulltime mediator he was determined to find “that office”. Gig teamed up with fellow mediator and friend Steve Cerveris to lease a bungalow office in the parking lot of a famous Italian restaurant located near Universal Studios.
Gig’s mother, Anna (famous for the Greek cookies she baked regularly for Gig and Steve’s clients), pushed Gig to purchase a building. She said “that way you’ll always have the best landlord and the best tenant.”

So, after years of looking, Gig and Steve and their wives found this special building on Pass Ave in Burbank (thanks to Gig’s friend David Golden) and created the most comfortable and attractive mediation office anywhere. They created a special home-like atmosphere where every room has its own conversation area. The outside garden, which includes a fireplace, fountains and multiple seating areas, was a perfect addition. The offices and garden can be explored through the Photo Gallery.